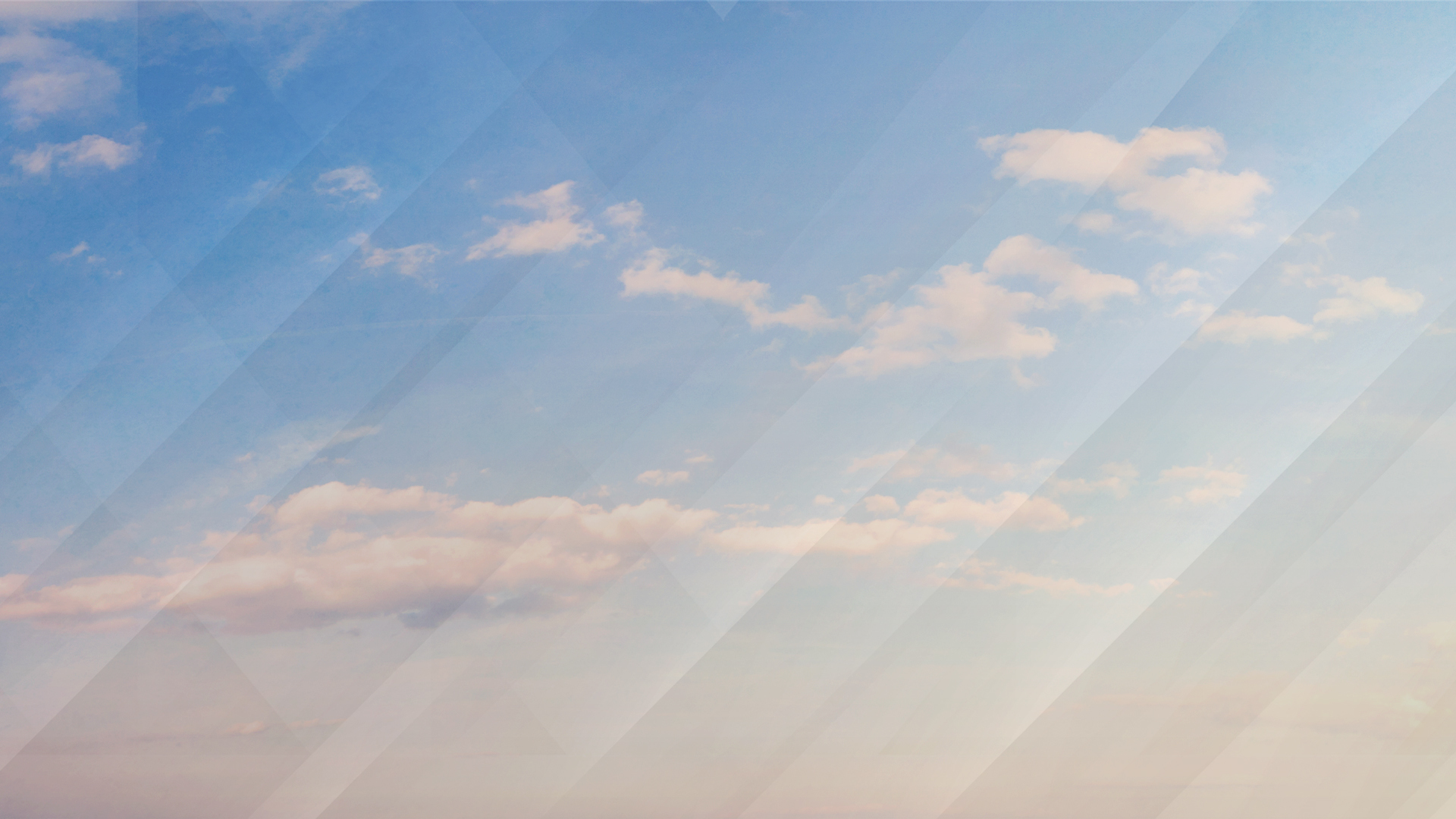 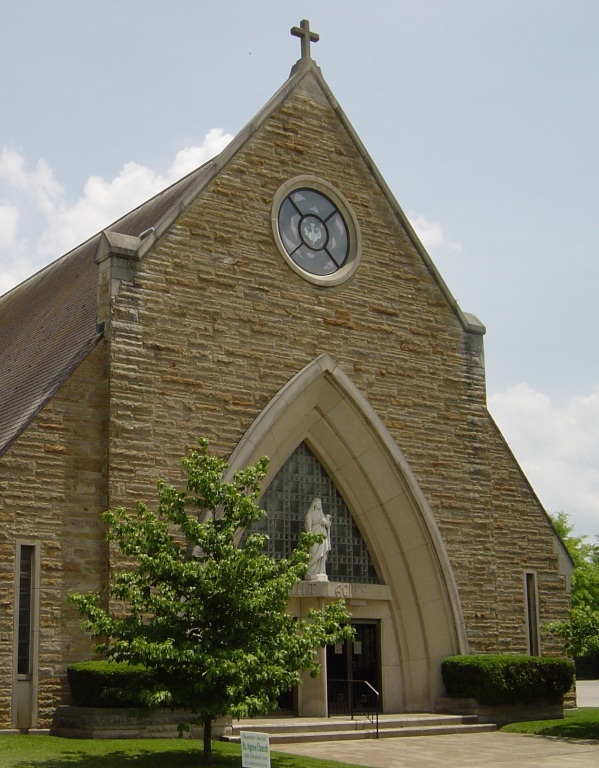 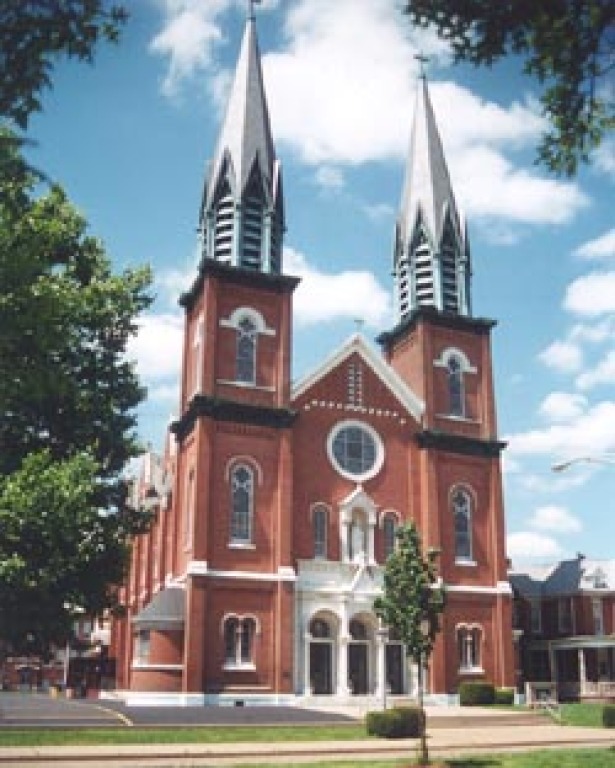 St. Boniface Parish consists of three churches located on the campuses of the three former parishes. (See more detail below) All three churches remain open and continue to be used. 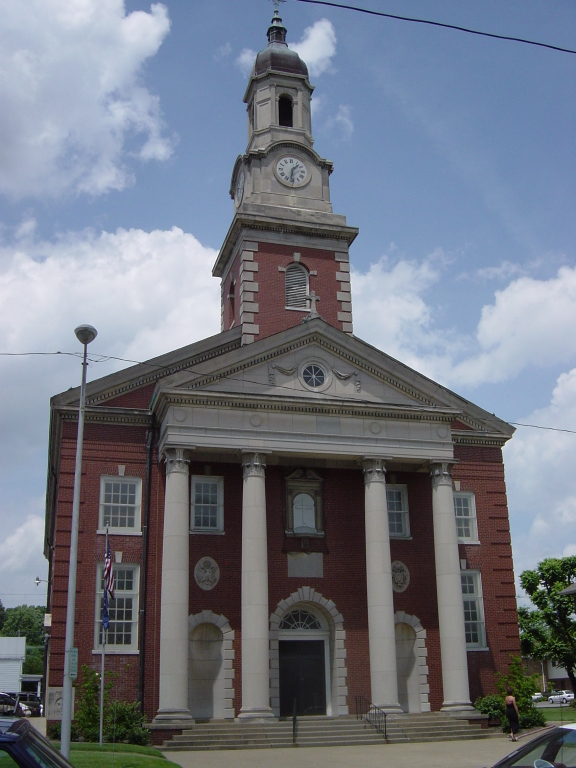 Sacred Heart of Jesus Parish was established in 1885 by Bishop Chatard of Indianapolis to serve the Irish Catholic families in the area known as Independence. The present church replaced two former buildings. It was copied from the Chapel of Our Lady of the Immaculate Conception at Mundelein Seminary near Chicago, IL. It was built in 1928 and was officially dedicated in April, 1929.

St. Agnes, Virgin and Martyr Parish was established in 1892 to serve the Catholic families that lived in the small railroad community of Howell.

It began as a missionary parish served by the pastor of Sacred Heart Parish. The present church was built in 1952 and officially dedicated in January, 1953.

The former St. Boniface Parish was established in 1881 to serve the German speaking Catholic families living in the Independence area. The present church was built in 1902 to replace the first temporary structure and the subsequent permanent building that was destroyed by fire in March, 1902. The present church is the only local church listed on the National Register of Historic Places. In addition to the main worship area of the church, Our Lady of Lourdes Grotto is located below the church. Dedicated in 1914, the Grotto is presently used for weekday Mass and occasional baptisms. 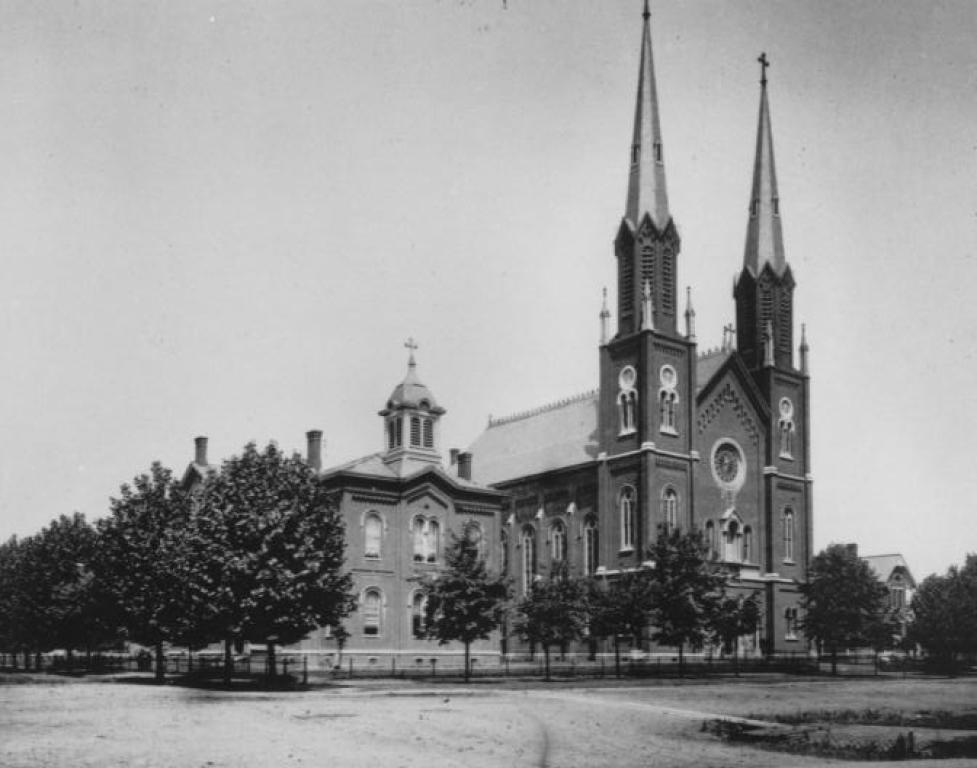 St. Boniface was established because of travel for the large German population living in the northwestern portion of the city. Its territory formerly belonged to Holy Trinity parish, however, it was remote and inconvenient for many.

The first move to build this church was a meeting of prominent Catholic Germans at the residence of Mr. Charles Schulte in October 1878. The land for the church was a lot bounded by Wabash Ave, Michigan St, 10th Ave and Virginia St. It was purchased by five Catholic gentlemen (Adam Helfrich, Charles Schulte, August Rosenberger, Henry Rietman, and Theodore Rechtin) in 1878 for $5,000. Soon after a letter was sent to the bishop of the Diocese of Indianapolis setting forth the facts.

On January 4, 1880, Rev. Bishop Chatard visited Evansville and received the deed to the property from the gentlemen. He appointed Rev. William Bultmann as pastor thus creating St. Boniface's parish.

St. Boniface became the fourth parish and the third of the German-speaking Catholic congregations in Evansville.

The first church was a temporary wood frame building. Construction began February 1, 1880 and it was built within one week. After two months an addition had to be made to accommodate the people, and in less than a year later this building was torn down to give room for the first St. Boniface.

St. Boniface as it stands today

On March 30, 1902 (Holy Saturday), the church building was struck by lightning at 11:30pm. A fire broke out and raged on through Easter morning. Only the 12 inch brick walls were left standing, and a few of the valuable articles were saved. Still, the parish was undaunted. No sooner had the flames completed their devastating work when plans were made to rebuild the church superior in beauty and size to the one destroyed. The original walls were used, gables where added and the steeples were lowered to 175 feet. The construction costs totalled $62,000, and the building was rededicated later that year.

Over the years, the present church (shown to the right) has remained remarkably true to its original state. Several renovations over the years, including most recently in 2006, have preserved its integrity and earned the church a spot on the National Register of Historic Places. 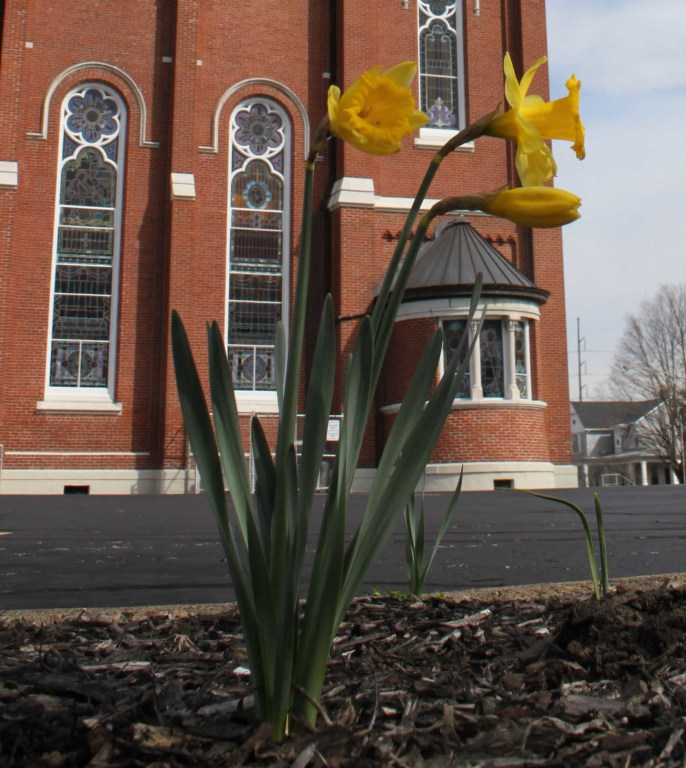 The rectory, or parsonage, is the oldest remaining building on the St. Boniface campus. Originally, the preist stayed in a home on Wabash Avenue across from the church.

The current rectory, a Queen Anne, red brick with white stone trimmings, was built in 1892. It is a substantial building complementing the larger homes across Wabash Avenue. The wrap around front porch was an early 1900s addition. 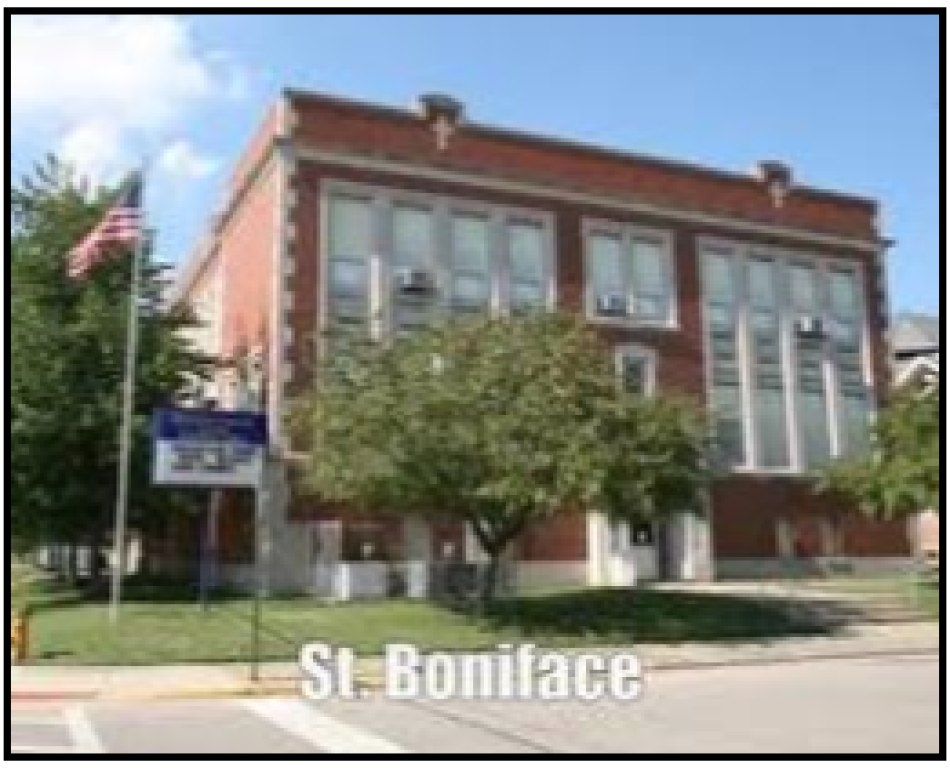 The first school was a small frame building about one block away from the original church. It was erected in the spring of 1881, though by 1885 a new school was needed because of overcrowding.

The second school, built at the corner of Michigan Street and Wabash Avenue. The six-room building cost $10,000 and was dedicated in December 1885. The sisters' home was also in the school until they got their own building in 1907. The school served the parish well until it was replaced with a more modern building in 1923. It was eventually torn down in 1951 and made into the current parking lot.

A new and larger school (present building) was built in 1923 on the west end of the lot. It was brick and stone and had a had a labratory, an office, an auditorium, a gymnasium, and a cafeteria.

When the school opened, the Ursuline Sisters from Louisville who taught there temporarily stayed at the original St. Mary's Hospital in the old Marine Hospital on Ohio St.

The parish obtained a house on the southwest corner of Virginia St and 10th Ave in November 1881. The sisters stayed at this home (which is still standing) until 1886 when they moved into the second school building mentioned above.

In 1907, a 15-room, state-of-the-art sisters' home was erected. It was a two story brick Georgian revival building designed by Harris & Shopbell. It is still standing on the south side of the block, but it was vacated in November 22, 1978 due to shortage of nuns.

Our Lady of Lourdes Grotto

The entrance to the grotto is located to the right ot the main church entrance. The history of St. Boniface Church can be traced through items displayed in the grotto.

The history of St. Boniface Church can be traced through items stored in the grotto. The Preservation Committee is working on a project to transfer all documents to video media. They plan to set up a display area so that visitors can view church and grotto details on a small screen

The St. Boniface grotto, modeled after the grotto at Lady of Lourdes in France, was built underneath the church in 1914. The flood of 1937 filled the grotto with 3 feet of water damaging several statues and caused it to close soon after.

The grotto reopened in 1972 as sort of a mini-museum, displaying St. Boniface relics. Tours are led by volunteers and offered on Sundays in May and October every year. Private tours can be arranged by appointment anytime.

The Parish was found in 1885 by Bishop Chatard. The building was paid for by John Reitz, for the Irish community, it was erected at the corner of 10th Ave and Iowa St. In July of 1913 the pastor and his counselors purchased the lot at Franklin St. and Upper Mount Vernon. In 1914 the new building consisted of the Church on the top floor and it housed the Sister of Providence on the first floor. 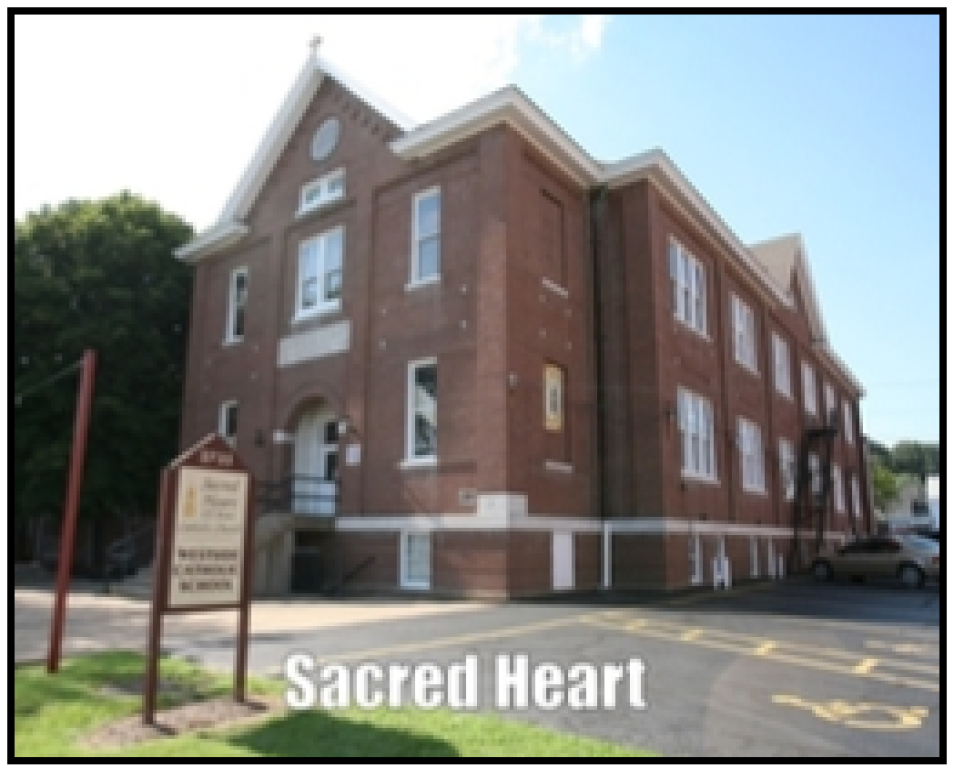 A convent was built in 1921 for the Sisters who administered to the school and the rectory was also built at that time.

In 1928 the present church was built. It was copied from the Chapel of Our Lady of the Immaculate Conception at Mundelein Seminary near Chicago, Il. Once again the Reitz family helped with the finances as well as others. The church was officially dedicated on April 14, 1929. The sanctuary was renovated in 1952 and marble altars were installed to replace the wood ones.

The parish was established for Catholic families living in Howell. The first church was a small wood framed structure built in 1892 on the corner of Egmont St. and Barker Ave. It was a missionary parish served by Rev, Patrick Fitzpatrick of Sacred Heart Church. In 1906 they received their first pastor Rev Francis Ryves. In 1910 the new Church was built with the Church on the top floor and the school on the first floor. 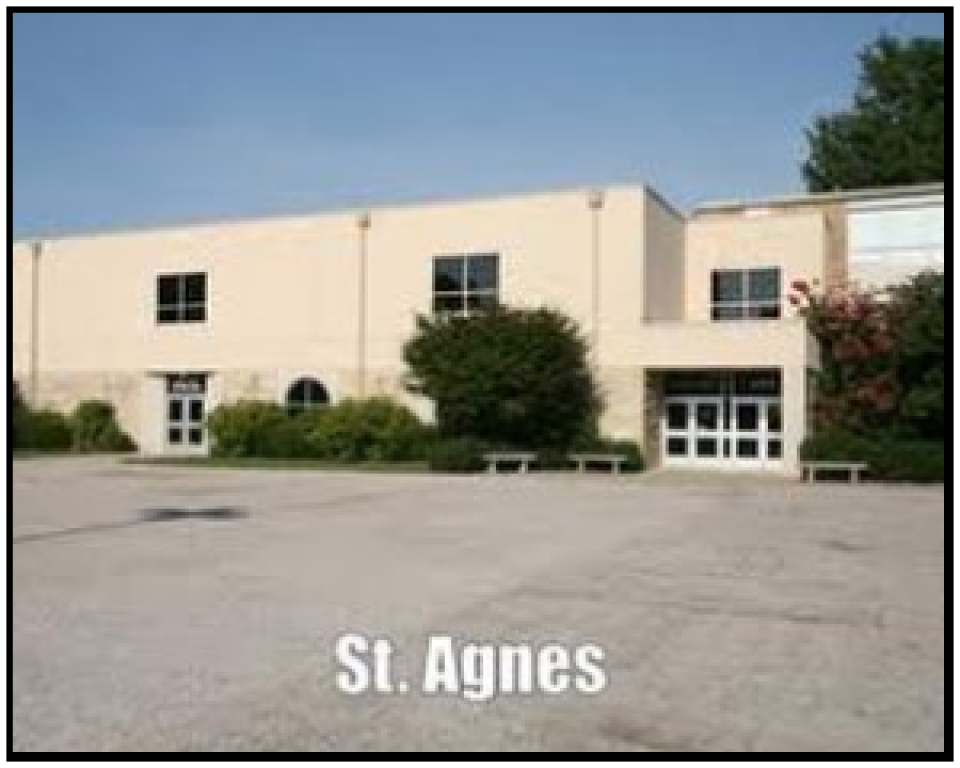 The Sister of St. Francis taught classes in a temporary two room schoolroom until the structure was completed.

Rev. William Bastnagel had the rectory completed in 1940. Rev Clemens Hut became pastor in 1948. He directed the building of the present Church. Parish volunteers constructed a sandstone bell tower alongside the new church using the original bell from the old church. The bell was renovated in 1979 and the interior of the church was remodeled in 1980. The new school was built in 1964 and in 2001 Ryves Hall has been added to the school.